Colleen Sleadd had a feeling her family might win. She and her husband, Nathan, were playing games with friends when Colleen was tasked with making a wish. Her dream, she said, was to be famous, for just for one day. 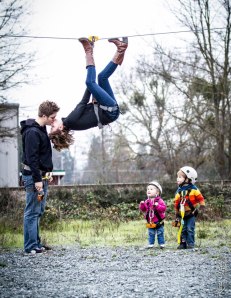 Not long after, that wish came true when she and Nathan, along with toddlers Brock and Ember, were notified they’d won the Hyundai/Rolling Stone Magazine “My Family Rocks” contest.  The contest aimed to find the “most rockin’ family in America”. The Sleadds had entered with an essay they’d taken turns writing, and a photo showing Nathan kissing an inverted Colleen dangling from a zipline outside their Grants Pass business, Sleaddventures, which sells zipline gear. The photo was the perfect representation of a young couple passionate about their family and the family business.

Hyundai and Rolling Stone thought so, too, and chose them as finalists. Then the contest was opened to on-line voting and, again, the Sleadds came out on top. Although the winners weren’t officially announced until March 15th, the Sleadds had already been enjoying their prizes: a trip to the Grammy Awards, a photo shoot with Rolling Stone Magazine, and a custom 2013 Hyundai Santa Fe “Rock-n-Roller” which they picked up at Butler Hyundai in early March.

How’s it been having a dream come true? Nathan, who was named the 2012 Young Entrepreneur of the Year (by the Oregon Small Business Association), hopes the publicity will help promote Sleaddventures.  Colleen jokes that the flamboyant, custom-painted Santa Fe sits in stark contrast to their modest house and must have neighbors who don’t know the story questioning their priorities.  They agree attending the Grammy Awards show was unbelievable.  And their short time in the public eye has them responding to media requests with a newfound composure (watch the behind the scenes video here).  They are unassuming, quick to laugh, and still in awe over the good fortune that’s befallen them.  Colleen flips to their two-page spread in the March issue of Rolling Stone. “We’re in the issue with Mumford & Sons on the cover,” she says with mock superiority.  As for that wish that had her famous for just a single day, Colleen grins.  “If I was offered more I’d take it.”